The Quest is the Quest: Recovering Missing Doctor Who Episodes 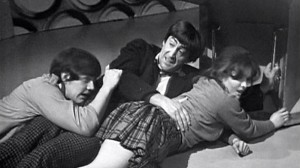 The Doctor, Jamie, and Victoria hold on for dear life.

The announced recovery, and immediate merchandising, of nine previously missing episodes of Doctor Who has sent fandom into dances of joy. The whole saga reveals questions about the shifting value of media works, the hidden economies and politics of global television, and narratives of discovery.

First though, let me give the very short version of how dozens of episodes of Doctor Who (as well as many other 1950s and 1960s programs) went missing from the BBC Archives in the 1970s, and how fans and media historians have spent decades trying to find them. (The long version is to be found in Richard Molesworth’s unparalleled history Wiped!, which will no doubt have to go into a third edition after this week’s revelation. DoctorWho.TV also has a nice, new brief account up). It was standard practice of the BBC until the mid 1970s to junk most of its tapes and even films once their apparent usefulness (as either archive material ready for reuse, or commercial assets ready to sell to broadcasters outside the UK) had expired. There were seemingly sound reasons for this at the time in terms of resource management. Videotape was particularly expensive in the 1960s, and master tapes were routinely wiped and reused. Kinescopes–16mm film copies of live or taped TV programs–were only useful as long as they could be licensed. While the syndication market had certainly taken off by then, validating a shelf life of a few years, the longer-term value of television, either culturally or industrially, had yet to be realized at that point. Something can’t be effectively protected if it’s not valued (as we’re learning all the time about the planet itself, unfortunately). This policy reversed in the late 1970s, at which point the BBC realized it was losing its heritage, and efforts began to recover what was lost.

40 episodes of Doctor Who have been found since 1981, leaving 97 left missing, remaining to be found, or, more intriguingly, actually found but yet to be formally announced (as rumors circulating around fandom for the past year or two would have it; see below). The sites of these recoveries have been wildly varying, but all point to the cultural and economic power of British colonialism, even in the 1960s and 1970s (especially in Asia, Africa, and Australia and New Zealand), and the unpredictable and serendipitous fates of such systems when they end. Regimes most often don’t come to a clean stop, but rather tail off and fragment, leaving a mess for successor regimes to either ignore or sort out. Historians, museums, archives, and collectors of every interest have experienced or are familiar with stories of rescuing important artifacts or documents from trash heaps, attics, walls, or even on their way to incinerators. Such has been, and will continue to be, the case with recovered Doctor Who episodes, which have been found so far in dusty, forgotten storerooms or buried anonymously in collections, sitting for decades. While it seems incredible that these nine episodes (11, actually, including copies of the two that already exist in the archives) sat in a Nigerian television relay station untouched for over forty years, anyone who’s had to move out of a house or office after years or even decades knows just how much stuff–random stuff–can accumulate with minimal notice.

The discovery narratives themselves then take on the trappings of treasure hunting, clandestine meetings, and even subterfuge. Chance encounters lead to valuable finds. Furniture is moved, and out pop film cans. Secretive collectors have to be discreetly wooed. At its most romantic, this often veers into Indiana Jones or Maltese Falcon territory (and I have to think that the revelatory scene in that story must have actually played out at times in the hunt for missing episodes). Thus, this endeavor itself, when coupled with the sense of loss and tantalizing possibility (i.e., what the story could be, based on the bits and pieces that survive), elevate what once was (and let’s be honest here) a workaday, ephemeral television show into a religious text (in the sense of offering “proof” to reassure believers). The continuing belief, bubbling through fandom even after this week, that yet more episodes have actually been recovered, also adds a complicated filter of suspicion towards the BBC, perhaps still not forgiven for losing the episodes in the first place: they have them, so why can’t they tell us?

As with any “lost” cultural artifact, I’m glad these episodes are back. Indeed, since they come from a particularly “lost” era (1966-68) of my favorite TV show, I’m flappy-hands-of-joy ecstatic. I’ve only seen one of the recovered episodes so far, the first part of “The Enemy of the World,” but I’m already reassessing my thoughts on this story and this time in the show’s history. I’m sure the remaining episodes will open up more windows I didn’t even realize were shut. That said, in all our nostalgic glow and historic intrigue for the episodes themselves, we need to make sure that we don’t lose sight of the broader contexts of the “loss” and “recovery” of a cultural product, and the complex relationship of media objects to our identities as fans and as stewards of forgotten or even disavowed cultural regimes.